Where Next For Leading Currencies? | AllForecast.com 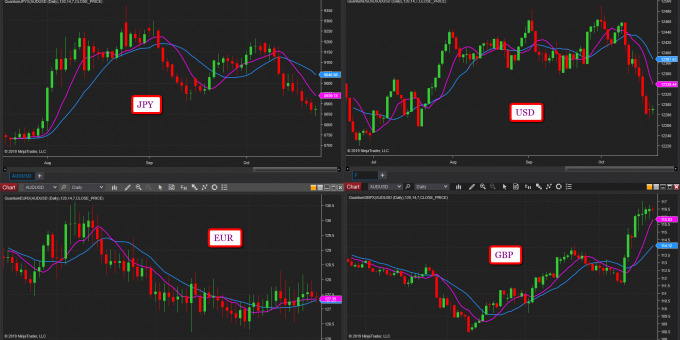 Once again it’s time to check out the four primary currencies on the daily timeframes for the Japanese yen, the US dollar, the single currency and the British pound.

And if we begin with the yen, the bearish sentiment signaled last week has continued, driving the index through key support in the 8920 region which failed to hold and has now become a significant area of resistance in any recovery. Yen’s weakness has been reflected in sentiment across the US indices which continue to maintain a bullish tone, and for currency pairs across the matrix with all the yen pairs making solid moves higher and starting to reverse the long term bearish trend.

Moving to the US dollar, the support level I highlighted in a previous post, and which I suggested would be key, has now been breached at 12,360, and opening the way for a significant move lower for the currency of first reserve, with the price now deep in the secondary congestion which extends towards 12,220. Yesterday’s price action of a long-legged dojo candle signals indecision and a possible pause point with a weak technical picture now developing.

Next comes the euro which remains rangebound, but with the German economy now sinking into recession, one wonders for how much longer, despite stimulus from the ECB. The technical levels remain as before in the 128 ceiling and 126.50 floor, and until one of these is breached expect further sideways price action. However, this is not to say the complex as a whole has been dormant, with strong moves in the EUR/GBP driven by pound buying, and in the EUR/JPY by equally strong yen selling and so producing a balance of buying and selling of the single currency reflected in congestion on the index.

Finally to the British pound which is stalling following the euphoric moves of a possible break in the current Brexit impasse which becomes ever more surreal as each week passes. The markets have been buying the GBP across the complex universally, but indecision is now building with the long legged doji candle of last week symptomatic of the current sentiment.