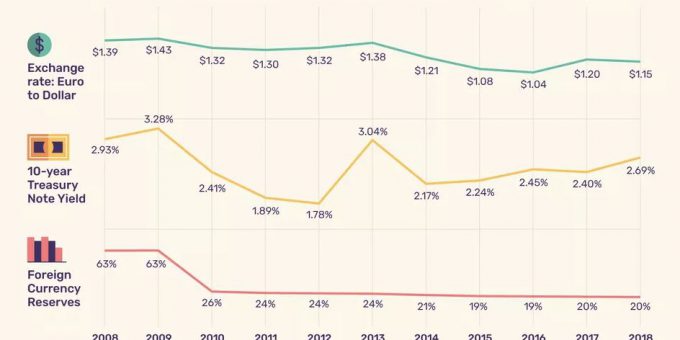 The dollar exchange rate compares its value to the currencies of other countries. It allows you to determine how much of a particular currency you can exchange for a dollar. The most popular exchange rate measurement is the U.S. Dollar Index.

These rates change every day because currencies are traded on the foreign exchange market. A currency’s forex value depends on many factors. These include central bank interest rates, the country’s debt levels, and the strength of its economy. When they are strong, so is the value of the currency. The Federal Reserve has many monetary tools that can influence the strength of the dollar. These tools are how the government can regulate exchange rates, albeit indirectly.

Most countries allow forex trading to determine the value of their currencies. They have a flexible exchange rate. The U.S. dollar rate shows the value of the dollar in comparison to the rupee, yen, Canadian dollar, and the pound.

Below, you can track the dollar’s value as measured by the euro since 2002. 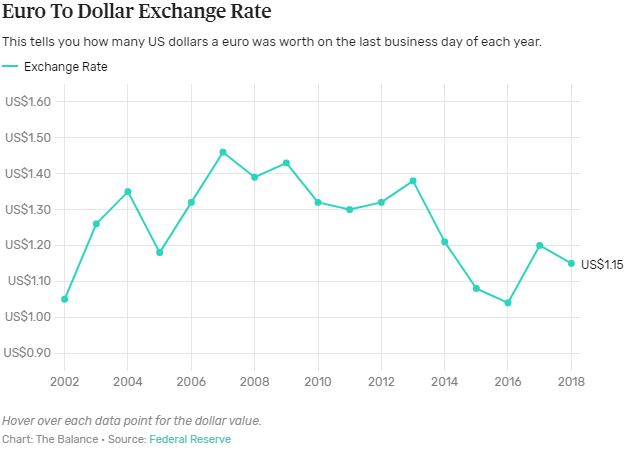 This chronology explains why the dollar’s value changed.

2008: The dollar strengthened by 22% as businesses hoarded dollars during the global financial crisis. By the year’s end, the euro was worth $1.39.

2013: The dollar lost value against the euro, as it appeared at first that the European Union was, at last, solving the eurozone crisis. By December, it was worth $1.38.

2014: The euro to dollar exchange rate fell to $1.21 thanks to investors fleeing the euro.

2016: The euro rose to $1.13 on February 11 as the Dow fell into a stock market correction. It fell further to $1.11 on June 25. This happened the day after the United Kingdom voted to leave the European Union. Traders thought uncertainty surrounding the vote would weaken the European economy. Later on, the markets calmed down after realizing that Brexit would take years. It allowed the euro to rise to $1.13 in August. Not long after, the euro fell to its 2016 low of $1.04 on December 20, 2016.

2018: The euro continued its ascent. On February 15, it was $1.25. In April, the euro began weakening after President Trump initiated a trade war. The euro fell to $1.16 on June 28, a few days after the Federal Reserve raised the fed funds rate to 2%. A higher interest rate strengthens a currency because investors receive more return on their holdings. But the by end of the year, the euro was $1.15.

The dollar’s value is in sync with the demand for Treasury notes. The U.S. Department of the Treasury sells notes for a fixed interest rate and face value. Investors bid at a Treasury auction for more or less than the face value and can resell them on a secondary market. High demand means investors pay more than face value and accept a lower yield. Low demand means investors pay less than face value and receive a higher yield. A high yield means low dollar demand until the yield goes high enough to trigger renewed dollar demand.

Before April 2008, the yield on the benchmark 10-year Treasury note stayed in a range of 3.91% to 4.23%. That indicated stable dollar demand as a world currency.

The dollar is held by foreign governments in their currency reserves. They wind up stockpiling dollars as they export more than they import. They receive dollars in payment. Many of these countries find that it’s in their best interest to hold on to dollars because it keeps their currency values lower. Some of the largest holders of U.S. dollars are Japan and China.

As the dollar declines, the value of their reserves also decreases. As a result, they are less willing to hold dollars in reserve. They diversify into other currencies, such as the euro, yen, or even the Chinese yuan. This reduces the demand for the dollar. It puts further downward pressure on its value.

At the same time, the percentage of euros held in reserves was 20% in 2019. That’s less than the 27% held in 2008. All other currencies gained ground as banks diversified their foreign exchange holdings. The International Monetary Fund reports this quarterly in its COFER Table.

How the Value of the Dollar Affects the U.S. Economy

When the dollar strengthens, it makes American-made goods more expensive and less competitive compared to foreign-produced goods. This reduces U.S. exports and slows economic growth. It also leads to lower oil prices, as oil is transacted in dollars. Whenever the dollar strengthens, oil-producing countries can relax the price of oil because the profit margins in their local currency aren’t affected.

For example, the dollar is worth 3.75 Saudi riyals. Let’s say a barrel of oil is worth $100, which makes it worth 375 Saudi riyals. If the dollar strengthens by 20% against the euro, the value of the riyal, which is fixed to the dollar, has also risen by 20% against the euro. To purchase French pastries, the Saudis can now pay less than they did before the dollar became stronger. That’s why the Saudis didn’t need to limit supply as oil prices fell to $30 a barrel in 2015. The value of money affects you daily by how much commodities you can purchase with your funds at a given time. When prices for food or gas rise, your money’s value shrinks because a given amount can now buy less than what it used to.

The Value of the Dollar Over Time

The dollar’s value can also be compared to what could have been bought in the United States in the past. Today’s dollar value is much less than that of the past because of inflation.

The growing U.S. debt weighs on the back of the minds of foreign investors. In the long-term, they may continue to, little by little, move out of dollar-denominated investments. It will happen at a slow pace so that they don’t diminish the value of their existing holdings. The best protection for an individual investor is a well-diversified portfolio that includes foreign mutual funds. 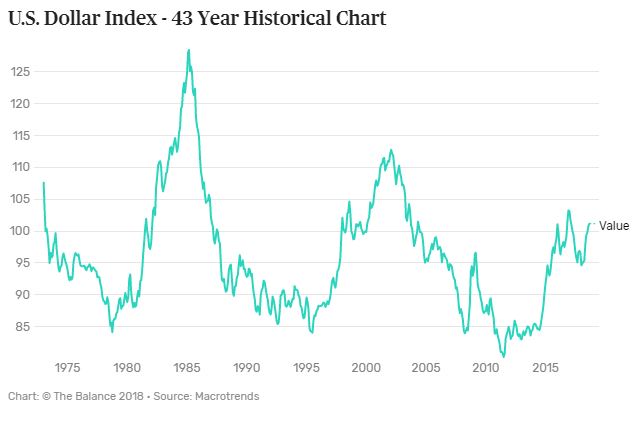 From 2002 to 2011, the dollar declined. This was true with all three measures. One, investors were concerned about the growth of the U.S. debt. Foreign holders of this debt are always uneasy that the Federal Reserve would allow the dollar’s value to decline so that U.S. debt repayments would be worth less in their own currency. The Fed’s quantitative easing program monetized the debt, thereby allowing an artificial strengthening of the dollar. This was done to keep interest rates low. Once the program ended, investors grew concerned that the dollar could weaken. Two, the debt put pressure on the president and Congress to either raise taxes or slow down spending. This concern led to sequestration. It restricted spending and dampened economic growth. Investors were sent to chase higher returns in other countries.

Between 2011 and 2016 the dollar strengthened. There were six reasons the dollar became so strong:

Between 2016 and 2019, the dollar weakened again. In 2019, it strengthened as investors sought safety. They are growing ever-more concerned about the impact of the Trump administration’s trade war.