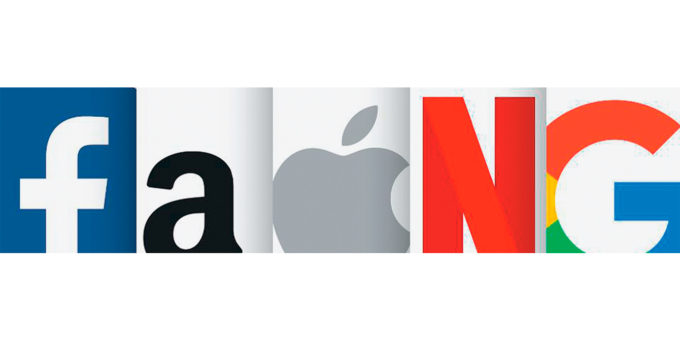 Facebook, Amazon, Apple, Netflix, and Google (FAANG) is a further extension of FANG (which originally did not include Apple) being both an acronym and buzzword for impressing investors, popularized by Jim Kramer of CNBC’s Mad Money program and others commentators to bring together today’s NASDAQ-listed high-performance tech companies.

Over the past 11 years, the US market has been growing at an average of 35% (arithmetic average yield) per year on the S&P 500. The rise from the lows of March 2009 was accompanied by a rapid growth in a wide range of securities. However, in the middle of the 11-year bull market, only a few stocks were the real engine of the S&P 500. We are talking about Facebook, Amazon, Apple, Netflix and Google promotions. This group of securities even received a special abbreviation – FAANG, and their total share in the S&P 500 index reaches 15%.

Since 2015, each of the companies has increased its capitalization by tens or even hundreds of percent. Having invested $ 10,000 in this group of securities at the beginning of 2015, by February 2020 it was possible to receive more than $ 39,000. At the same time, the S&P 500 index during this time would have brought only slightly more than $ 16,000 for the same investments.

A mix of “growth stories” and “value companies”

The secret of these securities lies in the fact that these are the so-called “growth stories”. These are companies that show significant and consistent revenue growth, and the business itself is often innovative. The market in which these companies operate is usually young and dynamically expanding.

It is believed that “growth stories” at a time of market turbulence, such as we observe in February-March 2020, are vulnerable compared to “value stocks”, that is, securities of companies that operate in established markets and often pay stable high dividends. But the market crash in 2020 showed otherwise. IShares S&P 500 Value (IVE) ETF fell stronger than iShares S&P 500 Growth (IVW) ETF. The ratio of the value of these two funds has reached historic lows.

The reason is that the market in which growth companies operate is expanding and becoming an increasingly significant part of the global economy. That is, most of the FAANG shares, in fact, became “value papers” and “growth stories” at the same time. Each of these companies retains long-term business growth potential in a particular area.

Each of the FAANG shares has its own strengths and potential for business growth even in difficult economic conditions. But to reduce the volatility of the portfolio, the share of each security in it can be proportional to its capitalization.

Facebook users reached 2.5 billion at the end of 2019 and continues to grow. Social networks have become an integral part of the life of every person and company. It is rare to find a business that somehow does not interact with its customers through social media. Digital advertising – Facebook’s main source of income – has already proven its effectiveness, and companies’ marketing budgets for online promotion are growing every year.

The company is a leader in the global e-commerce market. Thanks to the convenience and time savings, online shopping has become the norm for millions of people around the world. At the end of 2019, the monthly audience of users for the Amazon mobile app alone exceeded 150 million.

But the company has another significant growth point – Amazon Web Services (AWS). This direction provides services in the field of cloud infrastructure for companies. Customers no longer need to purchase and maintain expensive servers and associated network infrastructure, but can rent it. AWS is leading the way in an emerging market, and analysts forecast cloud computing business growth of 20-30% over the coming years.

The company manufactures a wide range of consumer electronics products, from powerful work computers to phones and smartwatches. Thanks to the ecosystem created, Apple manages to keep the first place in the ranking of the popularity of smartphones. Recently, the direction of wearable gadgets has been actively developing.

But Apple has another growth point – the services sector. The company is actively promoting its Apple Pay payment system. Sales of media content also make a significant contribution to the revenue of this area.

It is a streaming service that provides subscriptions to movies, series and other media content, both in-house and third-party providers. This new business model of the entertainment market is attracting more and more new users around the world. In January 2020, the company had 167 million subscribers, of which 60 million were in the United States.

Perhaps the most progressive company in the field of Internet technologies. In addition to the search engine of the same name, the company’s assets include such products as Google maps, YouTube, Gmail, the Android mobile operating system, the Gpay payment service and other popular software products. A wide range of Internet technologies and its own ecosystem allowed the company to win and firmly hold the first place among the providers of advertising services on the Internet. Another growth point is the provision of cloud services and infrastructure. In mid-2019, the company ranked third in this promising market.