Once again the major fx markets are relatively subdued today as we wait and see if there is going to be a Brexit vote by Parliament in the UK today. If the vote passes today, the most likely overcome for the pound will be positive, while a failure to pass will most likely be negative. Therefore, if passed, the UK will have a deal in place for UK to leave the EU, but what does that mean for the Euro?

Euro-pairs will mostly likely behave the same as the GBP pairs following the Brexit vote, although probably not to the same extent. Now that the vote over, EUR/USD will have some work to do in order to move higher. After testing the lows of the descending wedge in early October, the pair went on a bid ahead of Tuesday’s Brexit vote. The pair is currently consolidating near the 50% Fibonacci retracement level from the highs on June 25 to the lows on the October 1 at bear 1.1135. This level sits just below the 200-Day Moving Average at 1.1206 and the descending trendline from the descending wedge near 1.1230. As the RSI is currently near Overbought conditions, bulls may look for a pullback toward the 1.1000 horizontal and psychological level to get long (as the RSI unwinds), then target a break higher toward the 1.1400 level. Below the 1.1000 support level, there is strong support near 1.0900, which is the convergence of the downward sloping trendline from the shorter-term channel from the end of June, prior to the lows on October 1 and the bottom trendline from the previously mentioned descending wedge. 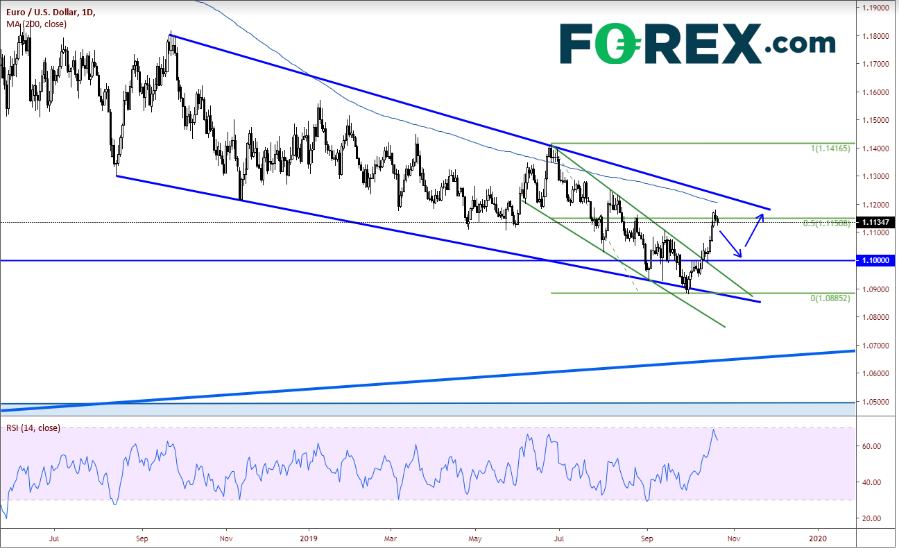 Let’s not forget about Draghi’s final ECB meeting on Thursday. Expectations are low for any kind of changes to the outcome of September’s meeting. Draghi will likely make his point to dissenters that the easing policy is necessary for economic stability given the European Manufacturing slowdown. However, never count Draghi out for a surprise in the Q&A! But although this is his final meeting before Christine Lagarde takes over as ECB president, he may not want to rock the boat.

Also note that Global PMIs are due out Thursday. Big misses to the downside will likely spur a selloff in euro pairs as the Eurozone economy continues to contract.