Euro to Dollar Conversion and Its History | AllForecast.com 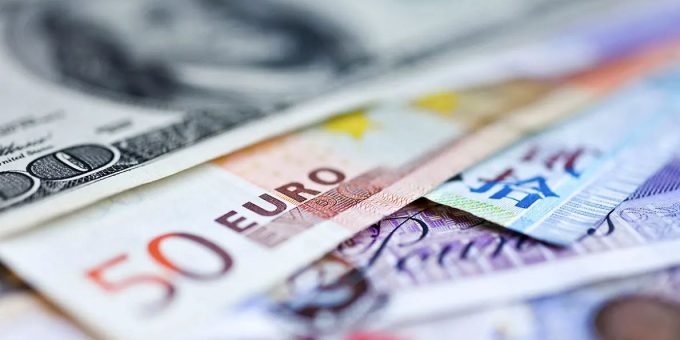 How the Exchange Rate Converts Euros to Dollars

The euro has a flexible exchange rate. It means that its exchange rate changes every day. This is because it’s traded on the foreign exchange market.

The euro’s value depends on three factors. The most important is the European Central Bank’s benchmark interest rate. Second, investors take into account the debt levels of individual countries, such as Greece. The third is the strength of the European economy.

Based on these factors, forex traders decide whether they think the currency will increase in value or not. When European economic growth is strong or when interest rates are rising, odds are traders will predict an increase in value. They then bid the price up. Others may read the same data and decide that the value of the currencies will decline instead. These traders bid the price down. The complex interactions of these factors determine the currency’s price at any given moment.

Despite this volatility, the EU allows the euro’s value to be decided by the forex market. 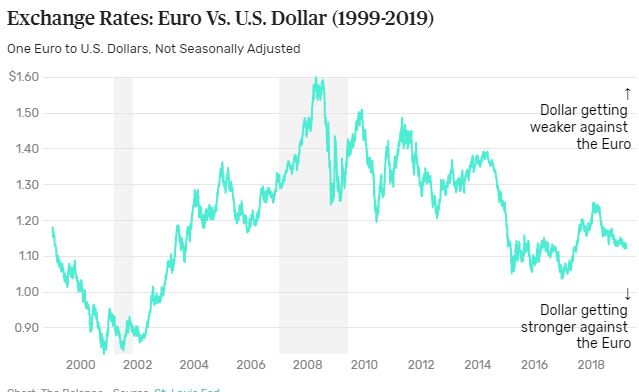 History of Euro to Dollar Conversion

2008 – The euro started the year at $1.47. Investors remained confident that the subprime mortgage crisis would be confined for the most part to the United States. This led to the euro’s strength. As soon as they realized that the recession was going global, the euro fell to $1.39. Businesses then hoarded dollars during the 2008 financial crisis.

2009 – The euro started the year in a strong position, at $1.40. It then fell to the year’s low of $1.25 as the ECB increased its benchmark interest rate to 1.5 percent. This time, investors were concerned that the ECB was hasty in raising rates, thwarting any chance of an economic recovery in Europe. The risk of renewing a recession offset the possibility of a higher return in holding euros or euro-denominated bonds or investments.

The ECB realized that its strategy backfired and began lowering its prime rate. As a result, the euro’s value rose by 20 percent between March 3 and December 1. In addition, investors’ fears of the U.S. debt, which at that time was $13 trillion, caused them to flee the dollar and dollar-denominated bonds. By the end of 2009, the euro was worth $1.43.

2011 – The euro started the year at $1.34. It rose to a high of $1.47 in July. This happened for two reasons. Investors abandoned the dollar, thanks to the U.S. debt default crisis. At the same time, the ECB raised its key interest rate to 1.5 percent. It increased bank rates for anyone lending or saving in euros, thus raising the value of the currency itself.

As soon as the U.S. debt crisis was somewhat resolved, investors then fled the euro in response to a flare-up of the Greece debt crisis. It created doubts over the EU’s financial strength and even the future viability of the euro itself. By October 2011, the euro’s value had dropped to $1.33. It rose for a brief while as EU leaders met to resolve what had then become the eurozone crisis. By December, it was back to $1.30.

2012 – The worsening eurozone crisis pummeled the euro. Many wondered whether the eurozone itself would survive. The euro started the year at $1.27. It rose for a brief while to a high of $1.35 in February, as investors were calmed by an intergovernmental treaty agreed to in December 2011.

In May, the euro plummeted to $1.24 as the Greek debt crisis worsened. The government was put on hold when neither party won enough votes to elect a president. The future of Greece’s membership in the eurozone was uncertain until a pro-bailout president was elected June 17. The euro rose for a brief while to $1.27 on June 20. It fell back just as fast as the interest rates on Spanish and Italian bonds rose to the unsustainable 7 percent level. By August 2, the euro was only worth $1.22. The crisis was soon averted and by December 31, it had risen to $1.32.

2013 – The euro started the year at $1.32. It strengthened to $1.40 by February 1 in response to signs that the eurozone debt crisis was being addressed. Its strength could have hurt exports and the struggling EU economy. It fell a little in March to $1.30, though it recovered by November to $1.35. As the eurozone economy strengthened, so did the euro itself.

2014 – The euro started the year at $1.38. It rose to a high for the year at $1.39 on May 7, 2014. Though as the Ukraine crisis started to heat up, the euro began falling once again. It remained above $1.30 until September 4. When ECB Chair Mario Draghi, announced that he would begin quantitative easing, the euro immediately dropped by 1 percent to $1.30. It fell to a two-year low of $1.25 in November, when the ECB announced that it would keep interest rates low. It then fell to $1.21 by the year’s end on fears that Greece would drop out of the eurozone after its January 28 presidential election.

2015 – On January 22, 2015, the euro fell to $1.12. This was because the ECB announced that it would purchase 60 billion euros in euro-denominated bonds each month starting in March. Quantitative easing boosted the EU’s economy, which was struggling with recession. On March 12, 2015, the ECB started buying the bonds. The euro fell to a 12-year low of $1.05 on March 13. Throughout the summer of 2015, the euro rose to $1.10 as it appeared the economy was strengthening.
On November 10, the ECB announced that it would lower interest rates. It also said that Greek banks must raise $16 billion to cover bad debt. This put downward pressure on the euro as investors feared a revival of the Greek debt crisis. At the same time the U.S. central bank, the Federal Reserve, raised the fed funds rate in December 2015. It drove the euro down to $1.07. The dollar grew strong when the Federal Reserve raised interest rates, reducing the money supply.
On November 13, 2015, terrorists attacked Paris. The euro fell further to $1.06 by November 30. The attacks prompted a flight to safety toward the dollar, thereby weakening the euro. It strengthened to $1.10 after the ECB announced that it would continue its quantitative easing program through to March 2016. The euro ended the year a little lower at $1.09.

In 2015, some analysts predicted the euro would fall to parity. If that happened, a euro would equal $1.

Traders used the euro as part of a profitable carry trade. They shorted the euro, which had a low-interest rate. They use the funds to invest in British pounds, which paid a higher interest rate.

2016 – On January 1, 2016, the euro was worth $1.08. It rose to $1.13 on February 11, as the Dow fell into a stock market correction. It remained within that range until the United Kingdom voted to leave the European Union on June 24. The euro then fell to $1.11 the next day as traders predicted that the consequences of Brexit would weaken the European economy. On Monday, it fell to $1.10.

2017 – The euro rallied 14 percent against the dollar. It was worth $1.05 on January 1, 2017. It remained between that and $1.09 until May. By September 8, 2017, it strengthened to $1.20. Europe began looking like a stronger economic bet after investigations into the connections between President Donald Trump’s administration and Russia worried investors. The euro fell to $1.16 after Germany’s close election. It regained its strength, ending the year at $1.20.
2018 – On January 1, 2018, the euro was worth $1.20. It fell to $1.12 on March 27. The EU economy seemed stronger. Investors hoped the ECB would end its QE program and begin raising interest rates. The dollar fell against the euro as investors feared President Trump’s tax plan would increase the U.S. debt. The confidence was short-lived as Italy’s populist election results threatened the eurozone. As a result, the euro fell to a low of $1.13 on August 15. It rose on a little, ending the year at $1.14 on December 28, 2018.
2019 – On January 2, 2019, the euro was worth $1.14. It fell throughout the year as investors fled to the safety of the U.S. dollar. They were concerned about the decline of global trade due to Trump’s trade war. By August 16, the euro had fallen to $1.11.
thebalance.com

1 thought on “Euro to Dollar Conversion and Its History”